The Collins’ ART 13 transmitter was used in large aircrafts like the Boeing B 29, mainly in the Pacifi in the second world war.

It was in use for both short-wave and long-wave purposes. The corresponding receiver which was used with the ART 13, was the BC 348.

The transmitter is a autotune transmitter, several pretuned frequencies (channels) could be selected. These setting could also be applied to the longwave channels. To be able to tune the antenna for longwave purposes, a longwave tuner was used.

The powersupply is a large rotary transformer, type DY12/art13 working on 28 volt DC.

The set could also (mostly in aircrafts) be remotely controlled by the type c87/art13 control unit. The pre-tuned channels could be selected by either the control unit or on the transmitter itself. Also at this box, a CW button was placed.

When used on longwave frequencies, a special longwave frequency oscillator unit was to be placed into the front of the transmitter (not seen on the photograph, now a spareplate mounted right of the 2 meters).

My ART13 in combination with my BC 348 is in fully working condition on 80 meters with an output of 120 Watts HF carrier (HF poweramplifier 813) (AM modulated (AG2 modulation with two 811’s in the modulator). Operating on Cw is possible as well. So far, I’ve made a lot of (successful) communications with other radioamateurs.

This is my ART 13 st this moment, the T47/ART13, which is an entirely new offset. The receiver in use is s a BC 348 Q on mountingbase. The mountingbase is a very scarce item her in The Netherlands. Picture was taken in my new radio shack. It’s doing very fine working in the 80 meter amateurradio band.

Notice the tuner unit in the midle of the front for transmitting in the LW frequency band. By switching the transmitter to the long wave band, the vfo is directly connected then with the PA stage with 813 valve. The anode of the PA is then connected via a condensor to an oulet at the right of the transmitter. This outlet is then connected by a short wire to the long wave tuner, a CU 32/ART 13. or a CU26/ART13. See the pictures. 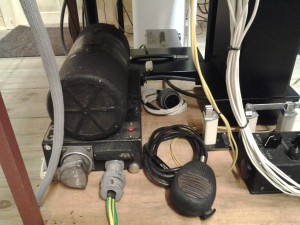 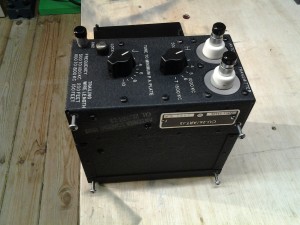 It is a tuner for the longwave- and mediumwave frequency band. Suitable for end feeded earial wires from 150 – 200 feet. 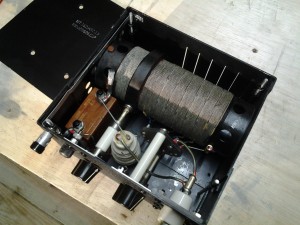 The inside of the CU 26. Only containing a variometer inductance with several connections, a condenser and choke. Left themounting plate   CU 126/ART 13. In perfect new condition.

Another liaison radio is the transmitter BC 375 E.

It was used in aircrafts like Boeing B17, B 24. during the second world war. Often in conjumction with the receiver BC 348.

It also uses a rotary transformer power supply, which I also own,  at  a voltage of 28 volts. Frequency bands could be chosen by different, so called tuningboxes. For working on a different frequency band, you had to pull out the tuning box unit in use from the transmitter and insert another one. All provisions were included in the transmitter to match the ouput stage to the end feeded longwire antenna.

It was placed just under the operators table. On the table the receiver BC 348 was positioned.

I use this transmitter often in the 80 meter amateurband on 3705 Khz in phone AM. Output power 100 Watts, anode-screen modulation by a carbon microphone. 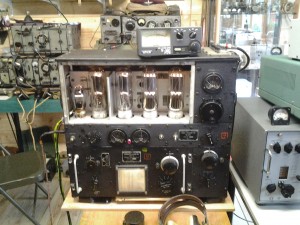 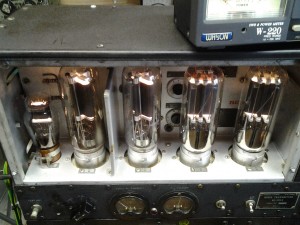 Here the front cover of the valves compartment is removed.

The valves are glowing so much, you can almost read your newspaper in the light they are producing. A beautiful view, especially in the dark.