H2S was the British radar equipment on board of aircrafts of the Bomber and Coastal Command airforces in WW2 . The main part was a magnetron oscillator valve housed in a cavity resonator.

The type, seen on the pictures below, the TR 3191, was working on a wavelength of 10 cm. Later improved H2S systems were also used at a wavelength of 3 cm, like H2S MK 7, described at the end of this post.
The HF energy power was radiated from the bally of the aircraft to the ground by a tuned parabolic aerial. This earial was used by the transmitter and receiver part of the equipment. The reflected transmitted pulses, by the surface below, are getting back to the receiver input, rectified and fed to the indicator screen(CRT). On the CRT of the indicatorunit appears the forms of buildings, coastlines etc., were the aircraft is located above, just like on a map. So the crew/navigator knows then exactly the position of the
aircraft.
An  American version of H2S is the type H2X on 3 cm wavelength.

Of course H2S was most secret, so that is why a little explosive material, in a socalled detonator chamber ,  was put at the inside of the transmitter. In case of the possibl, falling into enemy hands of the aircraft over enemy territory, the explosive should destroy the inside of it. So knowledge about this technics, was kept away. The crew member could establish this by pushing a “detonator” button on the navigators panel, and electrically  fire the little explosive.

But you had to be very careful these days of war, with those units, found in aircrafts, which were shot down then . It was possible, that the crew members did not have the time to push the de detonatotor button in destroying the inside by means of those little explosives, when the aircraft was shot down. 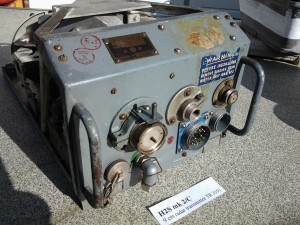 The front of my radar transmitter TR3191. which is complete and all original!  Also the case of it is it. 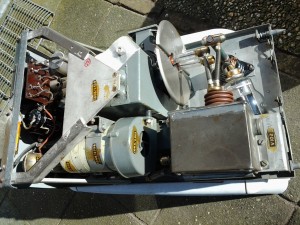 The upper view of the transmitter , with the fan for cooling the magnetron, below also the pulstransformer, which supplies the negative HT puls to the magnetron. 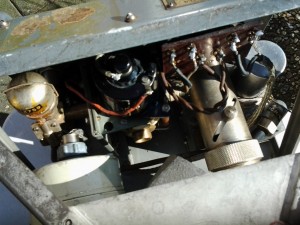 At the left the diode mixer, where the signal from the reflected puls, coming from the antenna during the receive phase, is mixed  with the local oscillator signal, coming from the tuningunit 207 or from the indicator unit,  into a medium frequency signal. In the middle the rhumbatron, a TR switch, and at  the right the wave quide to the antenna outlet connector.

The switch is filled up with a gas and a little bit of water vapor. As soon, when the transmit phase is there, the high voltage puls is applied to the switch, the gas is conducting because of that puls and so cutting off the crystal mixer input. The reason for that  little bit of water vapor is to establish a quicker start of the conduction, so almost no energy is passed through.

The power energy, coming from the magnetron, is that high, it would damage not just the crystal mixer, but also the receiver input stage. So as a protection of it. Of course it  will let pass through the reflected pulsed frequency , during the receive phase, to the mixer. The gas in the switch  is not conducting in that phase. 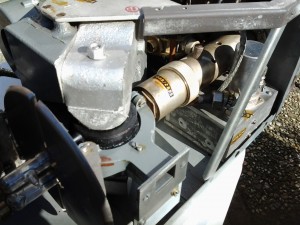 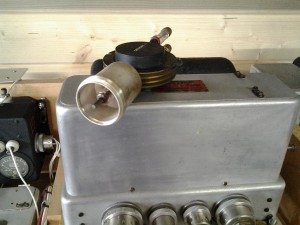 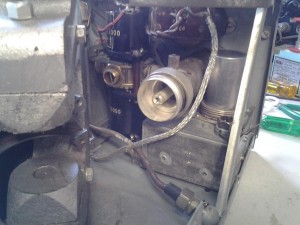 Here is very well to see, that the magnetron fits in the first part of the wave quide inside. Inside the wavquide is to be seen, output stick of the magnetron. 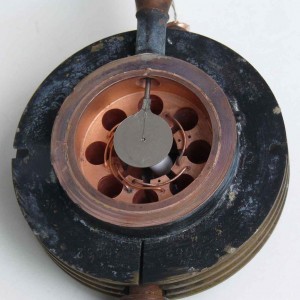 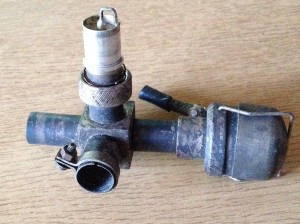 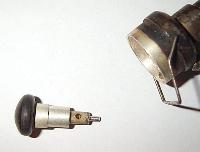 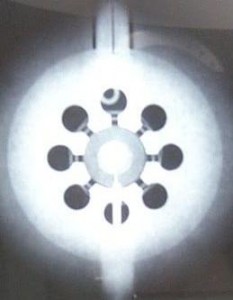 Another radar transmitter used by the RAF, was the H2S mk7A, a 3 cm wavelength ASV radar. The principle was the same as the TR 3191. ASV means Air Ship to Vessel.

The purpose was to detect the German war ships  and especially the U-boats, which were at the watersurface, for charging their batteries.

The feeder itself, the connection between the unit and the parabolic antenna was not a coaxial cable anymore, but a wavequide feeder.( kind of hollow pipe). This because of the the short wave length of 3 cm. Coaxial cable will reduce the energy  to the antenna too much. By using this very short wavelength, the picture on the indicator screen

I managed to find a lot of spares. Some missing parts were among them. Some chassis parts, to mount the fan, to mount the missing magnet at the back of the unit , the ring to fasten the magnetron on the internal wavequide and some internal covers. So it is now a bit more complete.

I am still missing the following

The magnet unit for the magnetron,

The tube or pipe between the fan and the air inlet of the magnetron,

Some original wavequides or pipes to fitt on the outlet of the transmitter.

Who can help me with these missing items? It is all a bit very specialized and maybe it could be regognized only  by the specialists among us, but who knowes.

Pse your re. in the comment at the end of this post. I would be most grateful. I sure like to complete this rare historical ASV radar transmitter. 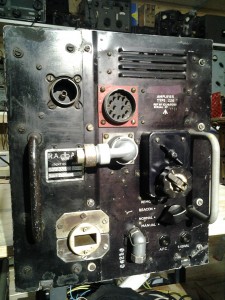 Front of the TR 3523.  At the left under part of the front, you can see the wavequide output flens. 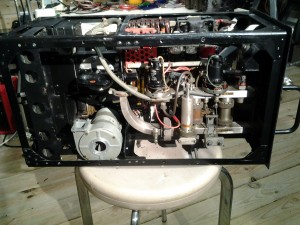 Side view, with left on the picture the 725A magnetron, attached to the  inner wavequide. Also the fan for cooling the magnetron. 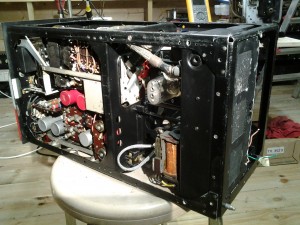 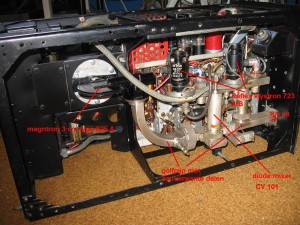 Another side view and the back of the unit. Here to be seen the glass bulb of the magnetron, normally this glass bulb is integrated into the pulstransformer, so you will not see the bulb, but the transformer.

A close view ofthe magnetron,  which outlet is attached to the wavequide by a ring. Note, that the magnetron is mounted on a metal plate, which is not original. This, because the impuls transformer on his mounting is missing. 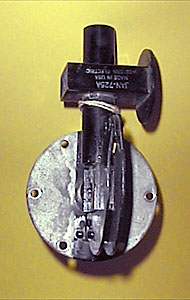 This unit is a very important unit for the H2S installation. It is used in verious versions of H2S. One of the functions of it, is providing  the negative puls for the pulstranformer in the magnetron transmitter. 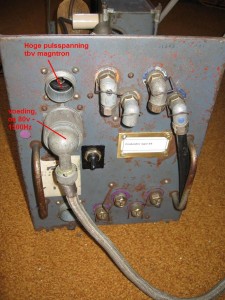 The front of the modulator unit. 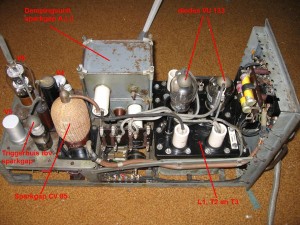 Inside view on the chassis.