Würzberg radar is a German radar system from WW2,  to locate, mainly allied bomber convoys, on their way to targets in Germany. When located, their positions were given to the Nightfighters from a central command station, to intercept them. When they were in the neighbourhood the picked up the convoys on their own radar on board.

A lot of Würzberg radar systems were spread out over the occupied European countries, coastlines.

Their maximum range was 80 km and the working frequency was about 500 Mhz,  It even had a IFF system, called Gemse, for indicating weather the convoy or plane was enemy or freind. Its use was still in progress, when the allies made radar systems on 9,1 cm with better valves and more power, the magnetron. It took a long time, before the Germans were aware of this 9 cm radar. At the last end of the war, they developed also one, called “Berlin Gerat”. They came aware of it, after a bomber plane went down in the neighbourhood of Rotterdam, The Netherlands.

Also they could detect 9 cm radar pulses at that time, with a socalled “Korfu Empfanger”, so detecting these radar signals at 9,1 cm.

Because I am so interested in all kind of German radar in WW2, also allied ones,  I decided to publish a new post of this matter.

I have only some small parts of German radar in my collection, because it is most difficult, to collect some parts of these devices. They are very rare. But also valves for very high frequencies and magnetrons etc. are interesting.

After some visits to the museum of mr. Arthur Bauer of  The foundation of  German communication and related technologies  in Duivendrecht, The Netherlands, I had the possibility to examine his working Wurzberg radar installation. I must say, I was most impressed of it. Complete with transmitter, receiver, power supplies, units for measuring the  power and a signal  simulation unit,  called artificial target Rebock, to simulate a reflection target on the CRT.

Also the whole system is discribed in his beautiful and professional website.

Not having the idea, to let it will work once, there are so many other rare parts to be need. Just a replica, but it must be possible to let the heater glowing. Also the the length of the lecher lines are not right, but that does not matter, it does not need working.

This SU 62 D is a special one, because they could change its transmitting frequency some. The range was about 485 – 520 Mhz. This frequency change was sometimes a must,  because of possible interference with allied transmitters. 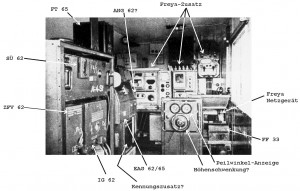 The inside of the Wurzberg housing at the back of the telescope. Note that another transmitter receiver (the SU 62 in the picture)  is used, then the type , described in this post. The different transmitter receiver , also Eidechse SU 62 called, could operate at 2 frequencies, 560 en 540 Mhz. The visible A and B on the front indicate it. Furtheron you can see the Impuls generator IG 62, providing the gridblocking of the transmitter. The CRT on the front, a LB13/40 can indicate the controll pulses for the grid blocking signal of the transmitter.

Some below, you can see a original picture of a Würzberg Riese radar. you can see his size, comparing it with the person in front of it. The reflector dish a 6 meter.  in the focus center , some little dipoles are collecting all the reflected pulses, received by the dish. The dish could turn in the horizontal position, just as well in the vertical position.  On a cathode ray tube, a LB 13/40 you could read the distance to the target in 2 ranges, eg. 40 km or 80 km range. 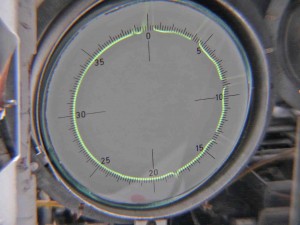 Picture at CRT, a target on a distance of 18 km. Picture taken by Arthur Bauer, PA0AOB.

There are still some Würzberg’s left here in The Netherlands.  For instance one in the Liberation museum at Overloon,which is very complete, and one at the Planetron in Dwingeloo. Both are sadly suffering from weather influences, because they  are placed outside in the open air. If nothing is done, they are rusting away. That would be a pity. 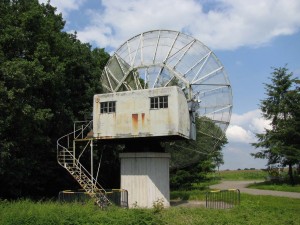 Another, still existing Wurzberg in bad condition,  at Dwingeloo, the Netherlands at this moment, 8-10-2015, at the Planetron. Note, that the parabool reflector is not original!

In the past, after the war, 2 Wurzberg Rieses were in use in Dwingeloo. 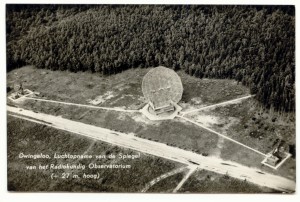 The 2 Würzberg’s beside the Dwingeloo radio telescope 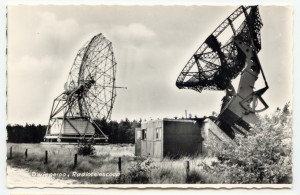 The Würzberg to the right (eastern one). A very beautiful picture  taken of  Wurzberg’s , in use in the past, and the new build 25 meter telescope , at Dwingeloo, The Netherlands in 1956. 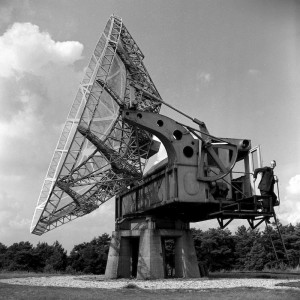 Würzberg in use after the war at Kootwijk.

After the war , most of the Würzberg dishes  in The Netherlands, were used for observation the H2 gas radio signals at a wave lenght of 21 cm, coming from milk way star galaxies. To get more details in observations then those made by  the Wurzberg’s, the 25 meter telescope was build in 1956. This leaded by Prof. C.A. Muller. With the Dwingeloo telescope they could make a picture, just seen from of our earth position, of our Galaxy in the Milky Way.  During some years after the new telescope was build, the left Würzberg ‘s were in use  for examinig the radiation of the sun. The Wurzberg in the  front moved in the 1980′ to the Wehr Museum in Munchen .The other also was already not there anymore. The Würzberg housing went to the Planetron, see picture.

Now back to Würzberg again: 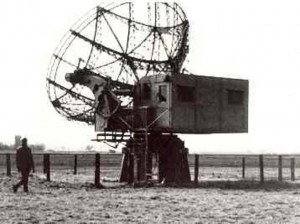 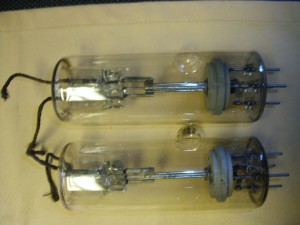 Transmitter valves, type LS 180, in use in the radar transmitter of the Würzberg. The copper wires at the left are the heater connections for 5,8 -6,2 volt.  The real voltage to be used, is written on the glass of the tube. At the right inside the anode.

Some documentation about the LS 180 transmitter valve:

I made myself a copy of the transmitter part, type SU 62 D. See pictures below. It is at true scale. 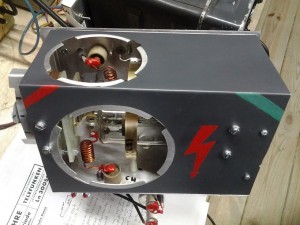 The front and above seen.In the mid if the picture the LS 180. 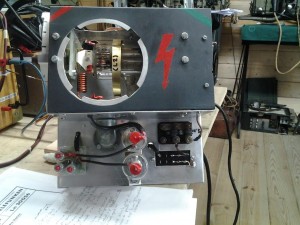 The front side. L21 is the output cupper strip, just above the anode inside the valve. Below left, the condenser  C6 and the 3 resistors in parrallel.

The condenser (0,05 uF) and the 3 resistors (16 kohm) in parrallel are in serie with the 8,3 KV anode line. They take care, that the anode only draw current, when the condenser is disloading, when the valve is not blocked by his negative grid voltage. When the grid of the transmitter valve is fully negative at 2,1 KV, the valve is blocked, the condenser is loaded again.  The anode gets no voltage the anode  is drawing a current!. The next episode, the negative voltage on the grid is disappearing, the condenser is disloading to the anode , the valve is drawing current. An episode further the whole cyclus is starting again. It is like a safety circuit for the valve, because when the negative voltage on the grid has been disappeared by malfunctioning , the valve draws only current via the 16 kohm resistor. Note that the current is DC not AC.  This will reduce his total input power. Even when it is dissipating this reduced power, other safety systems will work, so protecting the valve and probably exploding the transmitter unit.

On the right the resistor for the heater voltage, when heater voltage is applied, this wire wound resistor is a bit glowing (I got no other resistor), because of the current of 15 amper is flowing in it. But that will be not a  difficulty. Resistor will not burn away.

Just down the resistor, the supply connector for the heater voltage and the negative grid blocking voltage of 2,1 KV – 1,8 uS, coming from the puls generator type IG 62.

At the left of the casing, you see a small handel. With this handle you can tune the anode lecher and the cathode lecher at the same time to the right frequency, to be used.

The arrow warns you for the very high dangerous voltage. The red and the green stripe indicates, that the equipment was most secret. 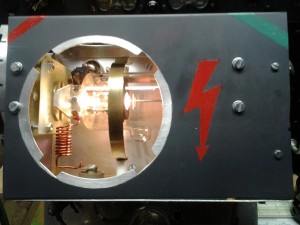 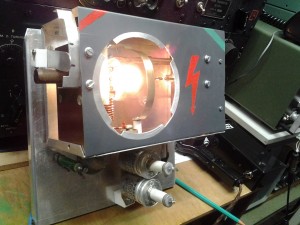 The transmitter is working!!

But not really, only the heater is glowing.  An intensive light is there, all gets very warm too. 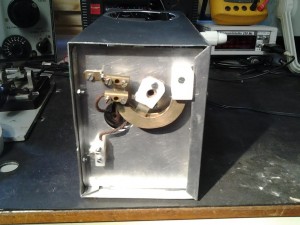 The cathode lecher line and tuning, also the heater connection. In the mid of the lecher  line the tuning arm. which is tuning the length of the lecher, by shortcut a part, the quarter wave lenght for that frequency is established. 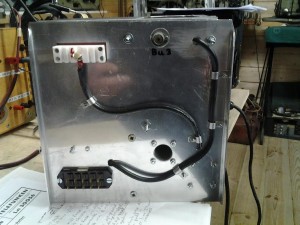 The backside. The upperleft connector is used for the 8,3 KV. Also the connection cable (at the right) to the grid of the LS 180 is to bee seen.

The circuit of the SU 62 D. It is just a  “simple” power pulsed oscillator. You can see the grid and cathode lecher. Capacitor C2 is for the degree of coupling, to let the system oscillate. The output device of the transmitter is only a strip, which is positioned around the LS180, so coupled to the anode,  by inductance. 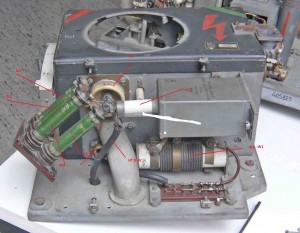 The original transmitter SU 62 D , a picture taken by Arthur Bauer, PA0AOB, from his transmitter unit during experiment to let it work.

The replica is now on display in my radio shack.