Recently, I  perchased a  LO6K39 in very bad condition. Uncomplete condition. It came with a seperate case, case frontcover and  a spare coildrum.

The receiver was bought by the former owner in de 1980’s and was “modified” by him. Like many surplus radio was done at that time.  A whole unit with LF-, a part of the detector- en CW filter stage  was removed. What a pity. Some mods are not always better.

So I removed all the new hardware. And was finding out, where all the wiring was going to.

But I decided to give it a try, to let it work again.

In the pictures below you can see the transmitter, when it came to me. 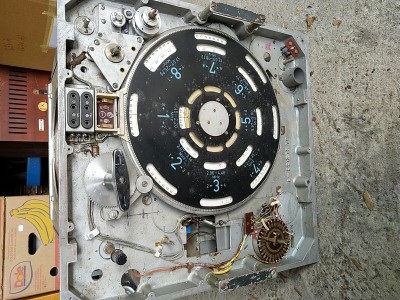 The front without the cover. Watch the big square hole in it, where in normally the “on/off”switch and CW filter was placed, all removed. 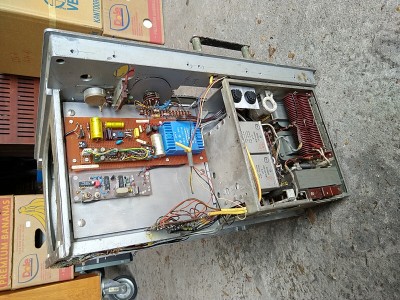 The inserted new hardware with the PCB’s and integrated circuits.

First, I cleaned the chassis from all dirt etc. It was very dirty, it was in backstore more then 30 years.

The coil drum was not rotating at all. Much hardened grease between the geer wheels. I had to clean them, took a lot of time. In most german equipment that grease is fully hardened and have to be removed. New grease had to be added.

In series with the anode I added the missing  HF choke, and a LF choke to the high tension voltage and some decoupling condensors.  By lack of the original components, I used the primary side of a little AMROH LF output transformator and a little little ferriet  choke, suitable for the used frequency. The HF choke for preventing  HF energie to the LF stage and the LF transformer to get the LF info for the LF amplifier.

A new LF amplifier with a RV12P2000 tube. Just in style.The input conected by a 10 nF capacitor to the hot side of the LF choke.  The circuit is the same as seen in the circuitdiagram of the LO 6K39. Only no 2000 ohm secundary side, but a 8 ohm one.  Proving just enough gain forthe use of a headphone.

I made a new frontcover for the receiver. Also a new antenna post was made on the front.

Now I inspected the powersupply, which seemed to work well.

The mains power cable was connected directly on the entrance behind the receiver. Maybe I will put a switch on the cover. But I hope once to get another original unit. However hard to get.

I switced the receiver on now, but nothing was to be heard, no noise or signal.

After examing it all, there was no HT on the anode and screen connection on several tubes.

So I cleaned the contacts on the coil drum, I readjusted them for making good pressure contact on the drum and tried it again. I also inspected alle the coil units too. 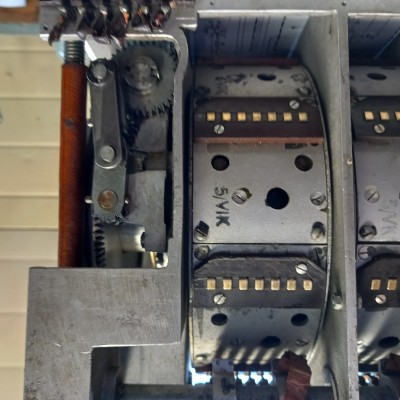 The contacts of the coil units of the drum. The 5/VI K  on the coil unit means: 5-th frequency band,  coil stage 6( detector stage), K for “Kurzwellen” (shortwawe) Showing an L, it means a coilunit of a Long Wave receiver LO6L39. And not suitable for shortwave. 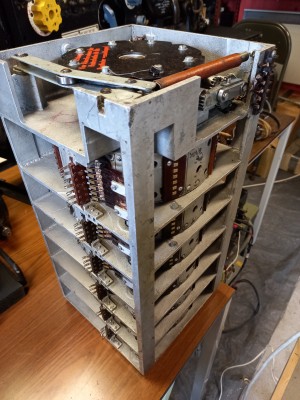 My spare coil drum. Above the revolver mechanics.

The receiver came alive at bit.

Now I noticed the detector stage did not oscillate in CW. It seemed to be something wrong with the resistance of the anode coil in the detector coil unit. I was lucky, because I had a spare one from a seperate spare coil drum (picture above). After replacing it, I saw it oscillating on my oscilloscoop instrument. But still no extra noise in the haedphones. It seemed that it was not on frequency.

For instance, when you tune the receiver in on 3600Kc, the detector must oscillate in CW also on 3600 Khz.

So I putted it on frequency. With the help of a frequency counter. Now a lot more of noise in CW.

I connected now a RF generator to the antenna post and setting it at 3600 Kc., with very low output of course.

I retuned al the HF stages of the receiver, by measuring the LF info at the LF output stage.

Now I heard various CW signals . Even SSB. The receiver was working again.

Only without a nescessary CW filter in it. The “Tonsieb”. It is in the missing unit.

But maybe in future I will add one?

It was a nice project doing it. It took a lot of time, but I was very satisfied about it.

The new frontcover , and the receiver in its case.

Side view receiver in its case 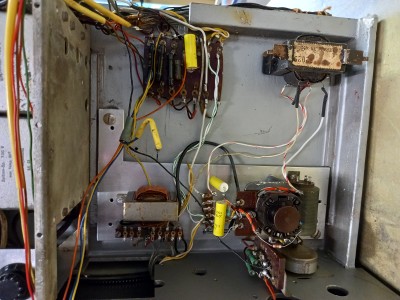