( High Power) at the battle of Arnhem. 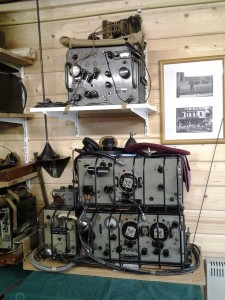 This is the Wireless set no 19 HPin my collection.

This radio was used  in The battle of Arnhem, only by The Royal Artillery Brigade radio net, for asking artillery support. They landed  near Arnhem at 17 september 1944.

At the lift at 17 september , there would be only radio contact by the WS 68 portable transceiver. This because, the second lift with the more powerful WS 22 radiosets in the  heavy armoured Jeeps, were dropped at 18 september. These was the socalled Para Report Centre. At 16.07 a contact was between the HQ (TAC) and The 1e Para Brigade, the 1 Air landing Brigade and the 21e Para Brigade with their WS 68 radio sets.