The 94-5 transmitter, model 32,  a small portable transmitter for the Japanese army for short distance. It was used in the Asian part  of the war front as a portable radio station between the battalions. The receiver, used with this transmitter, is the mark 32, a receiver with a regenerative detector.

The transmitter is a very nice constructed one, all the components are labelled by numbers, the functions of the controls on the front by text plates ,  ofcourse in the Japanese language. The various components, like condensors, variometer coils etc. are very small. The transmitter is like a treasure, a museum piece.

The output of my transmitter is about 150 mWatts on phone, on telegraphy about 500 mWatts, at a load of 50 ohm.

It can be used for phone and CW.

The only tube in the transmitter is a double triode, type UZ12, also can be used the American type 19 with heatervoltage at 6 volt instead the 2 volts for the Japanese type UZ 12. In my transmitter I used the type 19.

The powersupply is either a mark 19  manually (hand cranked) operated generator or dry batteries. The earial is a longwire with counterpoise.

For CW, both sections of the radiotube are connected in parrallel and function as a HF oscillator, driven by a crystal or acting as a variable oscillator, VFO.  By inserting the crystal, the oscillator changes automatically from VFO to crystal control. This by opening a closed contact by inserting it.

For phone, one section functions as a HF oscillator, the other one as a AM modulator, driven by a throat microphone. And that’s all for one tube!!

It should be mentioned, that the CW signal is quite stable in frequency if you use crystal control. A very steady and stable CW tone.

The crystals, being used, are special. Instead of the normally pin connections, it uses side connections, a smal plate is used for this, to make contact in the holder.

I already have made some qso’s with other radio amateurs in The Netherlands on the 80 mtr band with the mode CW.  My antenna was  a 20 meter dipole antenna, My report was RST 5.5.7.

The first picture explains the Japanese signs on the type plate.

Note the red plate in Japanese for “enemy listening too”. It is mentioned on every Japanese radio transmitter. This text is also mentioned often on german transmitters of WW2. So mind what you are saying! 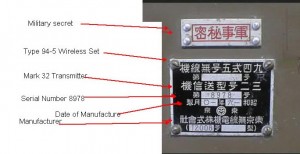 The next pictures show the beautiful inside and outside of the transmitter. Even the earial HF current meter on the front is still working after all those years. 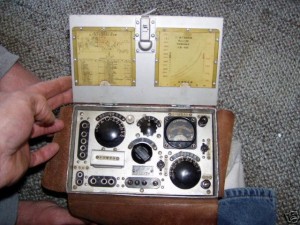 The front with 2 pictures on the lid, showing the schematic and the frequency calibration. 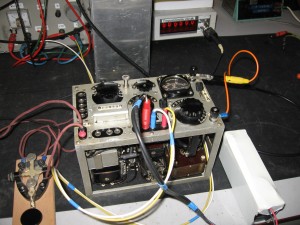 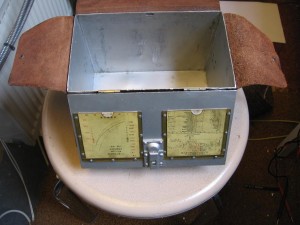 The case with leather covering. At the lid at the left of it the frequency calibration diagram, at the right the schematic diagram for service. 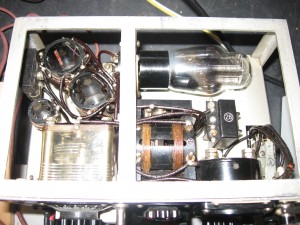 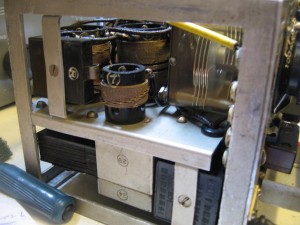 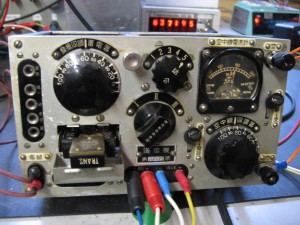 The antenna current meter, indicating, the transmitter is working on test, by pushing the morse key. 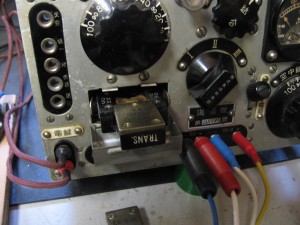 A modified crystal base, using FT 243 crystals in it. 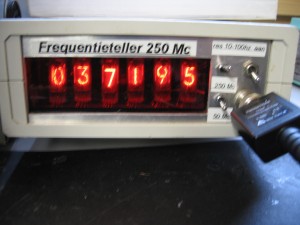 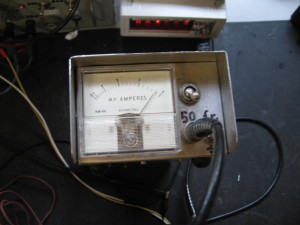 The dummy load, impedance 50 ohm. Note reading on the scale is not calibrated in HF amperes, just an indication! 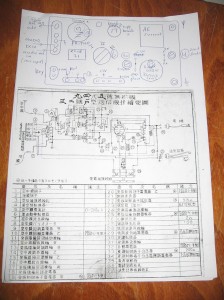 The schematic diagram, and my own notes, which explains all the functions of the Type 94-5.