In this website, I am showcasing my collection of communication equipment used by German, English, Canadian, American and Japanese forces in World War 2. I have been collecting these equipment for almost thirty years now. Most of the equipment shown on this website are in fully operational conditions as they were back in 1940-1945. I am repairing, make them original again, these equipment myself using only authentic components and blueprints which I have collected.

And, as a licensed radio amateur, callsign PA0 PZD, I am  also trying to make contacts with other radio amateurs with these restored equipment. It is amazing, that these old fashioned, more then 65 years old,  radio’s still doing very well, comparing them with the modern radio’s of today. Of course, frequency bands are more crowdy today with all kind of signals, then at that time, also the technical standard at that time was less then today.

A beautiful part of my collecting is for instance,  the RAF aircraft equipment ,the equipment used by the wireless operator and navigator in the Lancaster bomber, but also interesting is the  H2S radar  equipment, the GEE navigation setup,  used in the WW2 British bombers.

My special interest is the radio equipment in the various radio nets, used  by the British Airbornes at the Battle of Arnhem, september 1944.  Arnhem was the Market part of operation Market Garden, while the south part of the river Rine was the Garden part. I spend a complete article about the functioning of these wireless sets and reasons of the often failed radio nets between  the Divisional Command  and Brigades,  and Brigades and battalions, during that battle. This  in the post,  Battle of Arnhem Edition, an article also for special radio equipment and in the various posts of the wireless sets,  to be seen in the categorie  “British Wirelesss Sets and receivers“,  also a setup of the the Light Warning Sets Units, The VEEP installation, and the Eureka Rebecca installation, used also at Arnhem.

My home made Lancaster mock up. Unfortunable,  because of a movement to another village, the mockup is not there anymore. It was dismantled by lack of room at my new home. 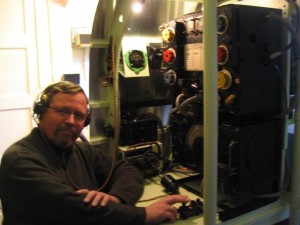 Here I was sitting in front of the T 1154/R1155 combination setup  in the wireless operator office of my Lancaster mock up. I have a CW contact with a Dutch radio amateur in the 80 meter band , mostly on 3575 Kc and sometimes also in phone at 3705 Kc. Was, because I moved to another village, where I needed to set up my collection again. There was no room anymore for the Lancaster mockup. The radios got another setup now.

If you have any questions or comments you can ask me on the contact from.

Below some new pictures of the collection my new room, which is some larger then the old one. 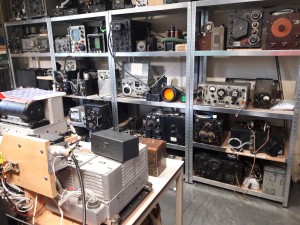 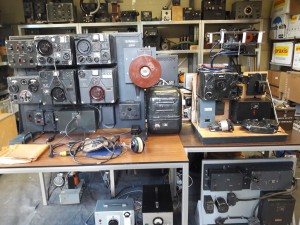 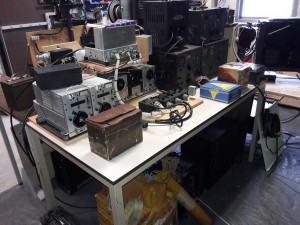 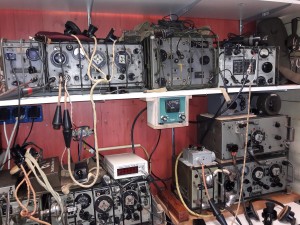 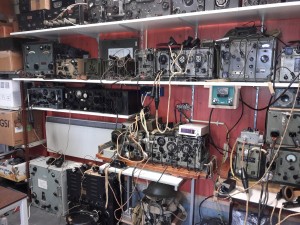 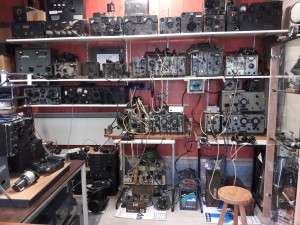 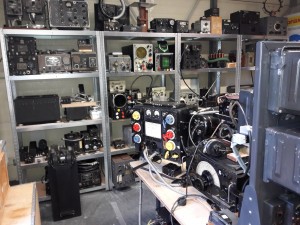