In this post my new beautiful German receiver, the Funk Horch Empfänger d.

At the  time of  world war 2, even before and also today, armies and also of course armies  in world war 2, so the German Wehrmacht, were listening at all frequencies, from long wave, medium wave, short wave till VHF. Not only enemy stations, but also the normal broadcast frequencies. All these to check them for correct transmissions and also to intercept  enemy transmissions for important information etc. Even in Germany, radio amateurs were checked out in the beginning. But very soon, they were forbidden, because they were not important to the government.

These “Funk Horch Empfängers” were very sensitive with a lot of functions to receive even small signals at any mode, like A1, A2 and A3 transmissions.

A various amount of receiver types,  a, b, c, d and f for all different frequency bands, were placed in listening centers. For these listening centers,  called the “Fu 14″, were 10 Torn, E.b’s,  3 large short wave receivers KW-E a, 2 Horch Empfanger Fu.H.E. a/c and lateron also 2 Fu.H.E.d in use.

Also special troops from the Wehrmacht used them in a portable way, the “Funk Horch Truppe”. The name  for troops, who used the type D, the F.H.E. d , was called “Fu.- Horch-Tr. d”. Code name was “Horst- D”. 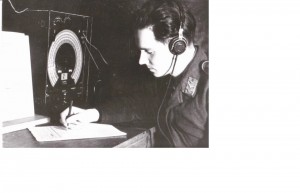 Manufacturer: Telefunken, code name bou. Each manufacturer had its own code, for instance Lorenz was dre.

The receiver is a super heterodyne type with a continuous variable bandwith by means of a crystal at 3000 Khz.

The MF stages at 3000 Khz, contains one crystal. The bandwidth is variabel . The calibration of this is also the same as 70 years ago!

Power supply is  housed in a separate housing or transport case,  providing two volts of a lead acid batteries and one 90 volts static dry battery. The  type leadacid battery is the 2B38 and 2 static HT anode batteries.

The receiver is complete original, inside and outside, so his case, and has it’s original color. 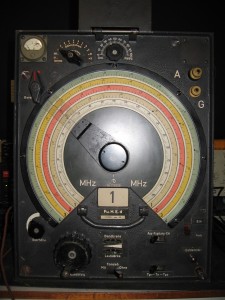 The front of the receiver. All functions are good to be seen. For increasing the size of the pictures, just click on them. 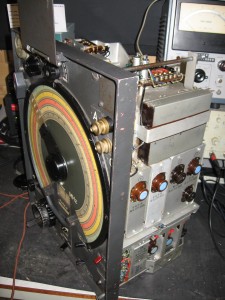 Side view of the receiver. 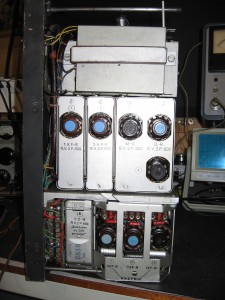 Side view. From left to right above: Upper row 2 RF stages, nr. 1 and 2, the mixer valve and the balanced  (Gegentakt) receiver oscillator. Lower row,  from left to right below: the 3 MF valves. 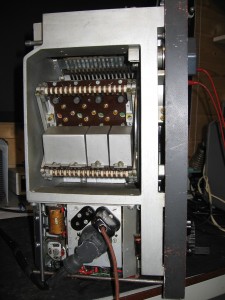 Other side view: above the coil holder of the HF , mixer and oscillator part.  Each wave band has its own combination of 3 blocks. The contact fingers are to be seen just at the above side of the picture.  When changing the waveband with the big knob on the front, first the contact fingers are lifted, then it rotate, and when in position, the fingers are released and make contact with the coils contacts in the holder.  It is a common construction often used in German equipment.

The 3 coil blocks, for each wave band,  in their housing, seen in the mid of the picture, are easy to replace.  Below the power supply entrance and 2 entrances for the headphones of 2000 ohm. 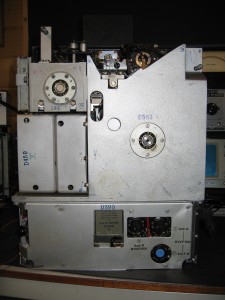 Back side. here to be seen the Audion-, the audio- pre amplifier- and the audio- final amplifier valve. 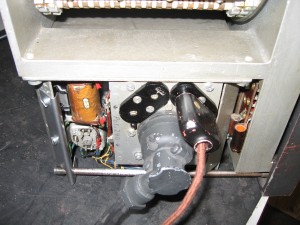 A view of the power supply entrance and the haeadphones. left the LF output transformer, which is a different one, the original is replaced because of malfunction by another German one. 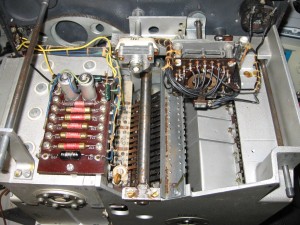 Upperview of the receiver. left the diodes for the AGC, eg “Mit Reglung”. In the mid the contact fingers for coils connections. Also to be seen the variable condenser for tuning the antenna. At the right the switch for measuring the anode currents for all the valves, to check them on the test meter at the left above corner on the front. All indications on the meter into the blue part of the scale. But the AGC ,”Reglung aus”,  switched off, the audio gain on maximun and switch mode,  “Tg1-Tn-Tg2″ at TG 1.

Furtheron, the receiver in in good working order. All his functions are working. The only component I had to exchange was a faulty condenserblock at the right side of the receiver, number 234, powersupply,  in the schematic diagram, which was very leaky. I did restore it, by putting a new one, electrolytic one of 47 uF-500 volts Dc, into the inside. It is like new now.

Also I cleaned all the electric contacts. And lubricated the mechanical aches of switches, scale driving aches etc.. 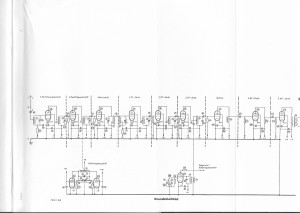 The principle schematic diagram. Note, that it concerns only the type d. other types, like a, b etc. differ in schematic. All valves are RV2P800. 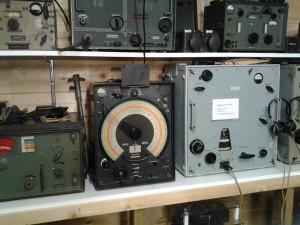 A close up of the receiver between other German equipment in my collection.