Normally it was produced by the German manufacturer C. LORENZ AG, in Berlin Tempelhof, but also by  others, for instance in Austria during the “Anschluss” with Nazi Germany.

It is a amazing design for a TRF receiver. 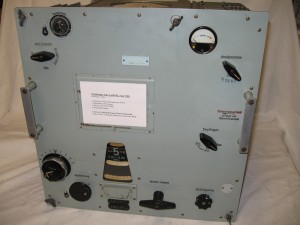 The receiver in the picture above is made by Schrag Ericson in Wien Austria. Typical are the missing name plates on the front, while on types, made by Lorenz, they are there.

On the blue nameplate, there is also a code  of 3 characters, called bvx. This means that the manufacterer is Schrag Ericson in Wien, Austria. Although on the Lorenz receiver, it is missing, only the date of manufacter is there. Normally BOU stands for Lorenz AG.

It was in use by the German Navy on their war ships like the Schwerer Kreuzer,  Prinz Eugen, Bismark for example.

Also used in the desert by the “AFRICA CORPS” of Rommel. 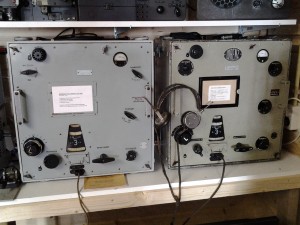 On the right another receiver, made by Lorenz. This one is working very well.

The Lo6K39  a is s a short wave TRF receiver, covering 8 frequency bands from 3000 kc till 25000 kc. There or more versions like the d type, which differ in frequency covering and some hardware.

The receiver has a great selectivity!  Because it has 6 tuned circuits in front of the detector stage. Warning: don’t try realign these circuits, it will end into a failure!

Also a CW  LF filter at 800 Hz is included ( Tonsieb ). This makes this receiver to a excellent choice for detecting CW signals. Just a 8oo Hz tone, no noise etc..

Also the crystal calibrator workes well. It gives 100 Kc signals all over each wave band. However in my receiver, the Austrian one, it has been removed.

Furtheron, the receiver has been excellent screened at all fronts. Also the poersupply lines in side were also fed through by many chokes. Because they were very afraid, that the radiation of the detector would come outside the receiver. So would be noticed by the allied listning stations. But because of the 3 HF stages, it was most unlikely.

Another reason, the the German Kriegsmarine did had  chosen for a TRF receiver, instead of a super heterodyne concept, was:

They were very afraid for receiving socalled gost signals. Signals which were in fact not there. At the war ships, there were plenty transmitters in use, with their antennas close together. There might be very much spureous signals in case of a superheterodyne receiver.  At the TRF concept, is what you hear, is also really  there. No doubt about that.

The reaction of the audion stage is variable. The down left knob is a twin one , the centre knob is intended for the gain ( audio ), the outer one is a kind of frequency shift, from the centre of it’s scale you can vary the frequency 3 kc downwards and upwards. This workes very pleasant for receiving CW or SSB signals.

The audio impedance is 4000 ohm. A original headphones, a Dfha, is suitable for this.

The powersupply is inside the receiver cabinet.

The weight of the receiver is 65 kilo’s! 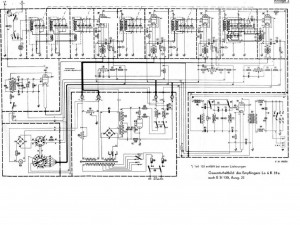 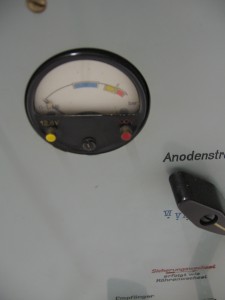 Just left above there is a black cover, which covers a neon lamp, this neon lamp protects the receiver input from the very high HF voltages from other transmitters on the ship (200 volts pp Voltage max.). The HF voltage part of the electro magnetic field, is very high, because of the short antennas , which establish this HV field especially and the high power output (hundreds of watts) of the transmitters in use. 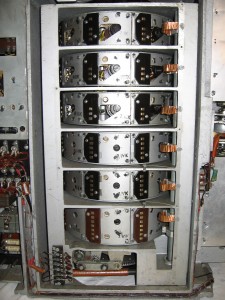 Above the view of the drum containing  the tuned circuits  units of each wave band. The coverplate has been removed for showing it. 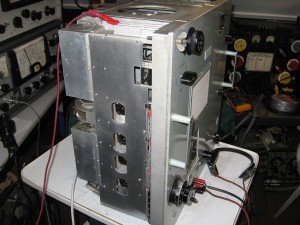 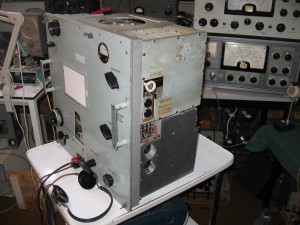 A side view of the receiver, in the holes, the valves RV12P2000 are placed  in their sockets. 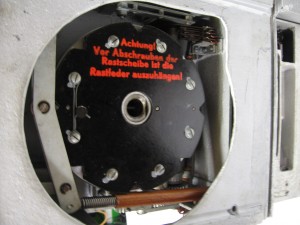 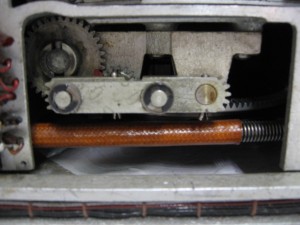 The fixing plate (revolver system ) to fix the correct stand of the drum, for each wave band. The contacts are making correctly contact with the various stages in the receiver. With the big handle on the front panel, you can change the wave band. This by this revolver system. Very nice in this system is, that just before turning the drum, first the contact arms are lifted up, just after it, the drum is turning!  Then the drum is fixed correctly, just after that the contact arms are going down and make contact wth the contacts on the tuned circuits inside the drum. In this way, keeping the contact in good order! It is a amazing design! 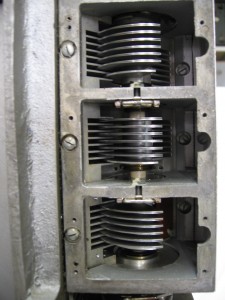 Above the view of variable condenser for tuning the receiver. The cover plate has been removed for this purpose. 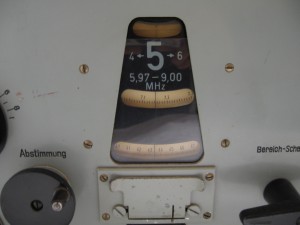 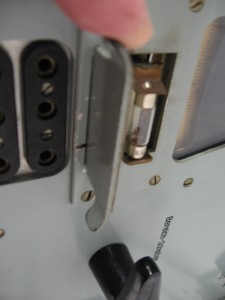 The 12 volt lamp, for illuminating the frequency scale, just by lifting the cover. Also to see the handle for changing the wave band.

The case of the receiver.

This picture, I don’t know for sure, a Navy department, as a l istning station for the ships or Uboats abroad.  Varous receivers to be seen, 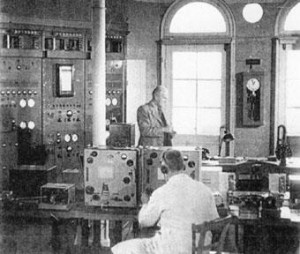 Unknown picture of the LO6K39. Maybe the Labor of the manufacturer, C. Lorenz AG in Berlin Tempelhof?  Hope someone can tell me. Pse your re. in  the comment below in this post.

Finally some pictures of the replacement  of the contact fingers at the drum. Some  were broken. To do this, I had to dismantle the drum from the chassis. First dismantle the front, then unsolder the wirement of the radiotubes, the components and coils. 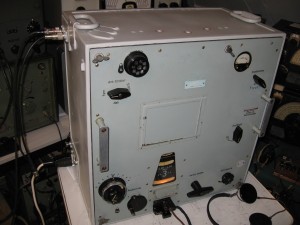 This was the receiver, where the contact fingers at the coil drum were broken. In beautiful condition, but not functioning.

To solve the problem,  I soldered new contacts from spare relais at the fingers. Then checked them in making contact with the drum contacts and rewired.  Put the whole thing together again, all bands were functioning again.

But it lookes all easy, but it was quit a job. 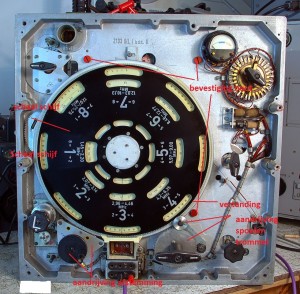 Picture after removing the frontpanel. What a beautiful construction. 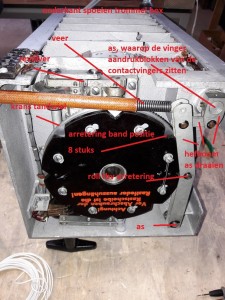 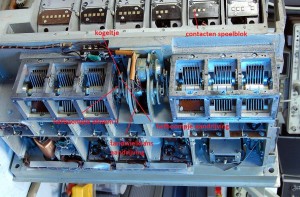 The tuning capaciters, screening removed. Note in the mid, the potentiometer, which keeps the gain constantly over the whole range. 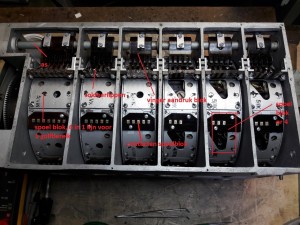 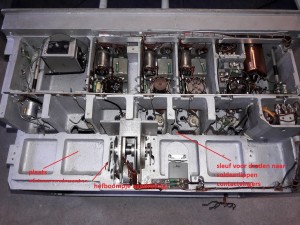 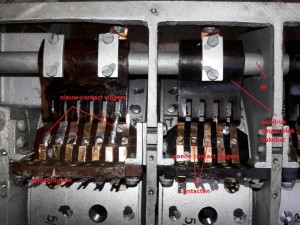 After the the project, I saw an advertisement on EBAY, of complete new contact fingers. A pity, I could buy  them not before. But maybe in future I will put them into the receiver. 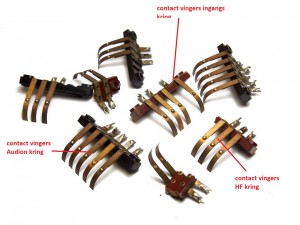